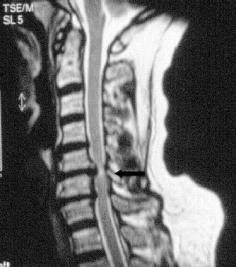 Twing in the neck or head is one of the most common pain which is caused by a sign of wear of the cervical spine.

Completely different is acute pain which stretches down into the arms and hands. This is called Cervicobrachialgie. This is mostly based on a slipped disc. Warning signals could be prickle, loss of sense or even more sever: Amyosthenia (less power in the muscles especially during gripping) as well as crooking or stretching of the arm. If you have any of these symptoms you should immediately contact a medical doctor.

Same applies for abnormalities in the bladder function or walking disorders. Due to pressure on the spinal cord permanent damage could appear. This clinical picture is called Myelopathy. 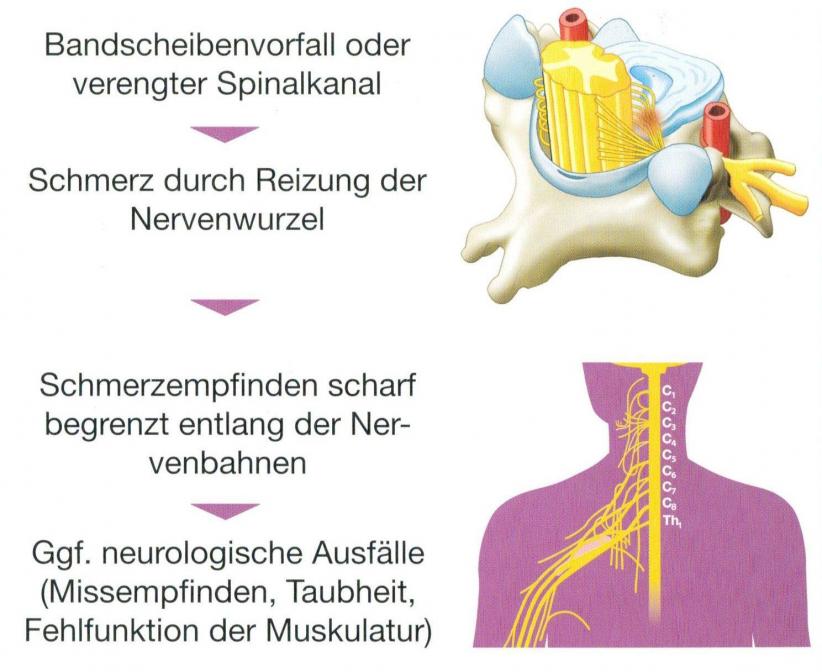 Or: diagnosis of a condition whose signs and/or symptoms are shared by various other conditions

The supply area of the skin through nerve roots and the ones of the nerves of the arm overlap each other. That is the reason why pain which sends out raids into the thumb and the index finger could have there origin at the sixth cervical vertebral body or at the supply area of the nerves of the arm (Nervus medianus). The differentiation between an irritation of a nerve root or a carpal tunnel syndrome successed by the use of the anamnesis. The elicitor of pain by an irritation of a nerve root could be a simple movement of the head. The pain mostly appears during stress. . If it comes to muscular weakness for example of the musculus biceps it is very easy to diagnose the affected spinal areal because the m. biceps receives its innervation from the 6th cervical level.Disorders which come in for a carpal tunnle syndrome come up during night in the majority of cases. Definitely helpful are further exploration like X-rays and a measurement of the function of the nerves of the arm. We can perform this examinations directly in our medical office. 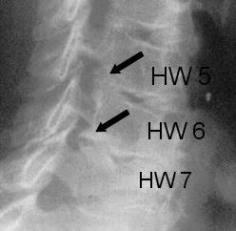 The reason for abrasion of the cervical spine is its huge flexibility. Just try to image how often you move your head during one single day. You can compare the cervical spine with a car where parts which are used very often and intensive abrade very fast. Symptoms of this abrasion could be a stenosis of the cannels where nerves are coming out at the cervical spine (Formialstenosis). Compared with the car the human body tries to act against this abrasion by its own. Induced by the relaxed vertebral bodies, the human body tries to stabilise the spine via accelerated bone growth of the cervical vertebras. Upcoming problems with this body-intern repair could be a constriction of the canal of the nerves.

An acute slipped disk is characterised by a fissure of the fibrous ring covering the jellylike tissue of the vertebra. This could be a after effect of abrasion or a capacity overload of the spine. 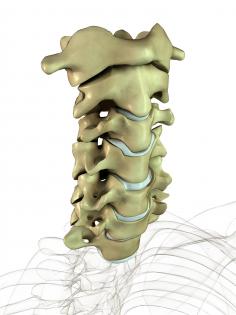 Anatomical changes in the structure of bones will be determined by a computed tomography. If there is a suspicion of a disease of the spinal cord or a dysfunction of the function of the nerves, an electrophysiological examination will be organized. Similar to an electric lead the electrophysiological examination tries to measure the permeability of the nerve tracts.

In general the outcomes of an operation of the cervical spine are very good. As a matter of principle the necessity of an operation must be given to perform it. We attach a lot of importance to this necessity. The surgical operation is just one of many possible therapies.

If there is the indication for neurological damage the complete healing is dependent to the heaviness and the duration of damage acting on the body. As faster the cause of the damage is eliminated as better are the chances of a complete healing.

Pain, discomfort of the neck or pain in the head are very common to recur.

Approximately in 50 % of cases, confidence trick which occurs after an operation on the cervical spine decreases and disappears after some time. Unfortunately it is very difficult to give a precise statement about the chances of healing before an operation

- medical information about the causes

- medical information about the behaviour

- if necessary: information about a chronic pain syndrome

- drug treatment including a procedure to relax muscles

In most of the cases we will create a step-by-step therapy in the beginning of the treatment which has very little side effects.

The only time we will think about an operation will be the time when there wont be any other possibility. Prior to this we have the option to choose out of many conservative and non-operative treatments. In cooperation with you we will have a detailed examination and discussion whereby we will advise you and figure out the further steps of your treatment.

C Spine surgery from the front 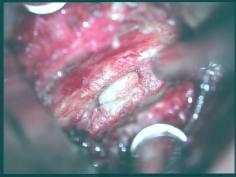 An operation of the cervical spine from the front

Approximately 95 % of all operational interventions on the cervical spine are made from the front. During this operation which is made with the help of general anaesthesia, a small section which has a size of approx. 4 cm will be made which is localized at the right side of the neck. Due to this procedure it is possible to disclose the vertebral column. With the help of a surgical microscope the doctor is going to extract all osseous stenosis with a diamond milling cutter out of the spinal disk. After that procedure the spinal disk will be stabilized by an implant which is made up of titan or plastic. In special cases it could be necessary to use an entire spinal-disk-implant.

There will be one X-ray, one day after the operation to exclude any complications. The fibre which closes the small cut will be removed after ten days. Due to this minimal operational intervention you won’t have to stay at the hospital very long which means that normally we are able to release our patients after 1-3 days.

This type of operation is also named “Sponylodesis” or “Cloward-procedure”. 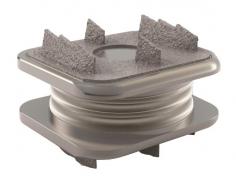 Prothesis for an intervertebral disk

The prosthesis will be implanted from the ventral (frontal) side.

Prosthesis for intervertebral disks are made up by two metallic plates which are laminated with an titan cover to facilitate the adhesion of the prosthesis and the vertebral body. Between both plates is a synthetic core (consists of Polyethylen) located which enables the flexibility of the segment.

The implantation of such an prosthesis has the main goal to prevent the bordering intervertebral disks from a surcharge.

C Spine surgery from the back

An operation of the cervical spine from the back:

Patients suffering from an isolated narrowing of the nerve-root channel due to a degenerative transformation are applicable for this kind of operation. Patients must not suffer from a slipped disk.

The operation gets performed by the use of general anaesthesia. The patient gets bedded lying on the belly whilst the head and the cervical spine get stretched. With the help of a surgical microscope the surgeon will carefully separate the thick muscles of the neck. During the entire operation the surgeon has the possibility to use an X-ray to ensure to be on the correct level. In the further procedure the surgeon cuts away the lateral parts of the vertebral arches which lowers the pressure on the nerve- root and releases the discomfort in most of the cases. This operation is also called Frykholm operation and commonly used due to the fact that the surgeon does not have to implant any artificial substances.

Spondlodesis of the C Spine 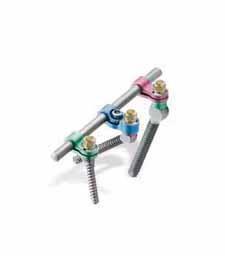 If it comes to a larger and longer lasting narrowing of the vertebral channel the spinal cord needs to reoccupy some space to reestablish its function and to release pain. In some cases the hardening or strengthening of the cervical spine is the only way to achieve this. By implanting a system of splints and screws we can prevent a further destruction of the spinal cord which could otherwise lead to paraplegia.