Unpleasant discomfort which typically appears on both sides and starts at the feet.

Disorder in the transmission pathway from proprioreceptors to the brain. These receptors are responsible for the sense of position. Patients are not able to walk straight with closed eyes.

Changes of the skin. Eg. over or underproduction of sweat

Disfunction of the Gaster, Intestine or bladder

Triggers are usually injuries to the extremities, the disease occurs more often on the arms. This can include inflammation, surgery, too close a cast, fractures or compressions. Rarely it comes to a sudeck without external occasion. The occurrence does not depend on the severity of the injury.

In addition to local changes in the autonomic nervous system and the peripheral nerves, central processes are involved in the development. Indications for this are observations that the disease can also occur on the other half of the body.

Most symptoms are to be interpreted as an imbalance of the autonomic nervous system in favor of the sympathetic. It comes to vasoconstriction with the consequences for the blood circulation and supply.

Ultimately, no common cause has yet been found, and depending on disciplines, there are discussions as to whether the physical or mental component predominates. 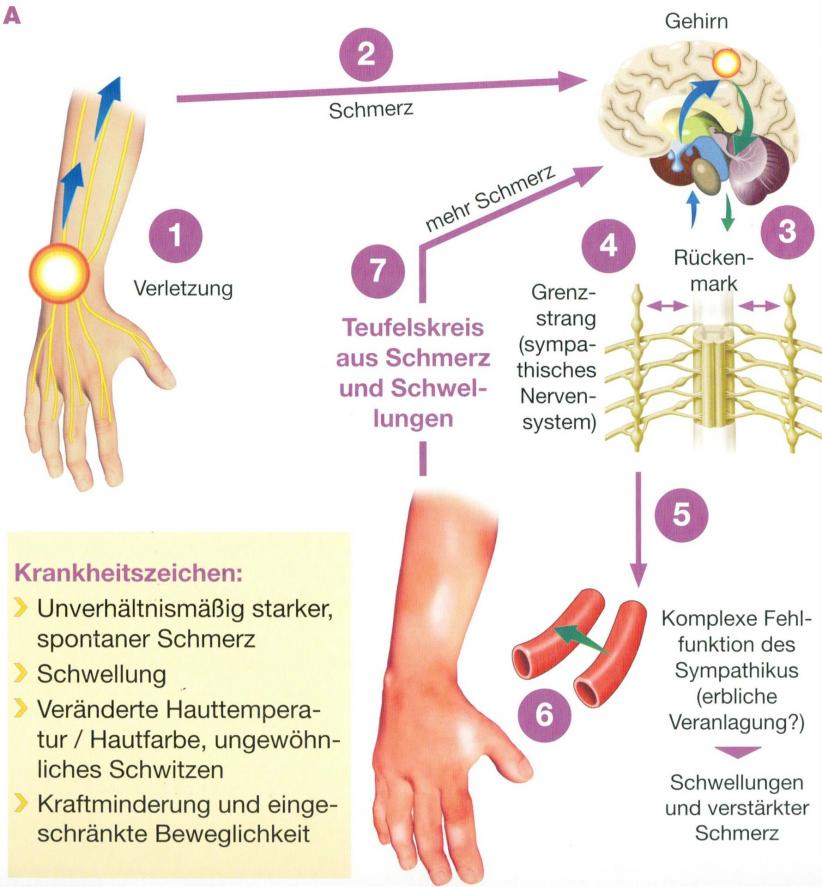 By the typical anamnesis and the evaluation of the symptoms we create the diagnosis. An acute herpes zoster infection can easily diagnosed by the blisters which appear at the supporting areas on the skin of the affected nerve. Only in rare cases the herpes viruses do not show any blisters (Herpes sin herpete). In the following we will directly initiate a treatment with virostatic agents.

After some time there is the possibility that neuropathic discomfort appears. The chances for this increases drastically if the infection is not treated with drugs. Compared to the polyneuropathy where nearly all nerves are affected the herpes zoster infection only affects a single nerve root. The most common symptom is a hypersensitivity at the affected skin area.

We can perform a blood examination in our medical office where we have a special look on:

Decisive for a good therapy is the early diagnosis. In the late stage of the disease is expected to permanent damage. In case of doubt I recommend an early treatment, because the consequences of a too late treated Sudeck are more serious than possible side effects of his therapy.

Depending on how far the disease has progressed, different treatment options are possible:

- Physiotherapy: in the acute stage not on the affected limb, then required.

- Blockades: targeted blockade of the excess sympatic with injections of local anesthetics